How We Downsized Homes Twice in 1 Year {And survived!} 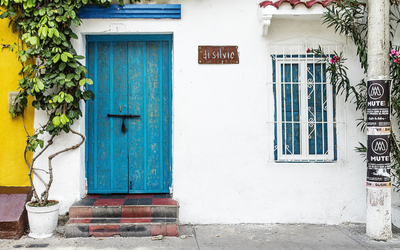 Tiny houses are all the rage.

It seems like our society is finally making the paradigm shift from needing/wanting stuff, stuff and more stuff to the simple life of minimalism.

People (including myself and my husband) are feeling the daunting weight of having too much STUFF.

I often wonder how I went from having a manageable amount of things, to a house/garage/attic/storage unit full of a bunch of C.R.A.P. that I don’t need.

But I can’t really place all of the blame on them.

We sold our house in April of 2016 and moved into a rental house.

Related Post:  How We Sold Our House in One Day

We planned on building our house quickly so we could move straight from our rental house into our new house, but we didn’t even break ground until 2 months before the end of our lease term!  Yikes.

We entertained the idea of staying in our rental house until our house is built, but a month-to-month lease was $200 more per month, and honestly that is just not what we want to spend our money on. 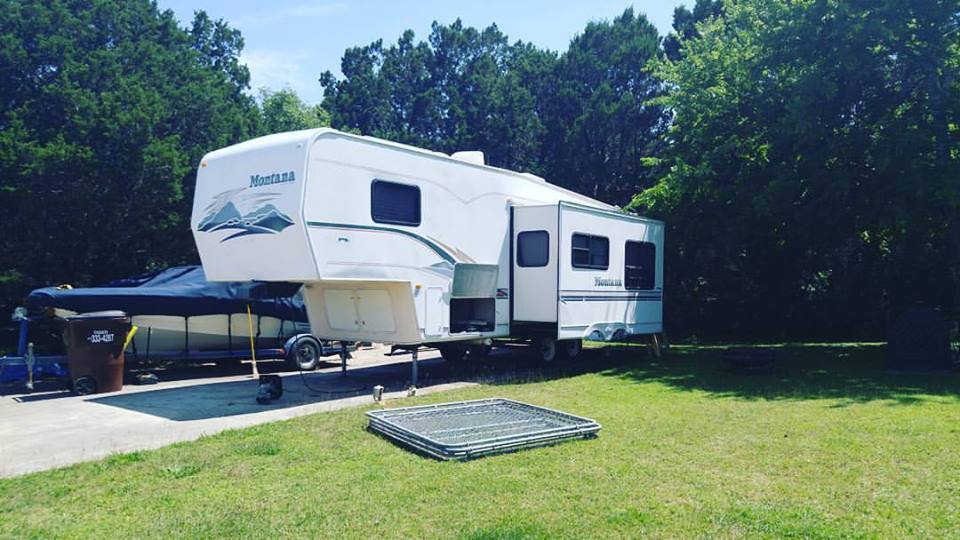 So in one year, we have slashed our living space by about 1500 square feet.

In reality we will be not completely confined to our “glamper”.

Our office will be housed in an Airstream that we previously renovated (future blog post on that) and it will also house toys that we can’t fit in our “glamper”.

So, let’s get to the good stuff.  How the heck are we downsizing AGAIN?  I didn’t even think it was possible to do it the first time!

If we haven’t used it in the past 6 months, it gets purged, donated or sold.

This DOES NOT apply to seasonal clothing or decorations.

I’m talking about the hair curlers that sit under the bathroom sink that I’m never going to use and the ingredients in the pantry that I made one dish with LAST YEAR and never used again.

If it’s something I can sell, it will go in the “SELL BOX” and put on Varagesale.com for 2 weeks.

If it doesn’t sell in that 2 week period, it gets donated.

Donations will go DIRECTLY to the nearest donation station.

Food items, or broken items will go in the trash (in a black trash bag so my kids and husband can’t fish them back out!)

Don’t save any kids clothes past 2T.

Truth be told, I’ve held onto both my daughter’s and son’s clothes, so this is a new rule for our second downsize.

My daughter is now 5 and my son is almost 3.

I will have another child one day, but I don’t know when.  I have no business having containers and containers full of kids clothes.

It’s more expensive to rent a storage unit than it is to buy new kids’ clothing.

I’ll admit it’s more of an emotional attachment than it is a monetary one.

Plus, I just don’t like to clothes shop that much, especially with little ones in tow!

I asked a mom of 7 if she keeps her kids’ clothes and she honestly answered “no”.

Kids quickly wear out their clothes and it’s not worth keeping old, worn out clothes for the next child.

So unless it is an expensive piece of clothing or something SUPER special, it’s being sold/donated/thrown.

Our kids are blessed beyond measure to have so much love surrounding them.  Along with that love comes a lot (And I mean A LOT) of gift giving.

While we are beyond appreciative, we have a terrible time with the adage “Out with the old, in with the new.”

As my kids have grown up, I’ve had a tough time getting rid of their baby toys.  If they show a little bit of interest in an old toy, I feel guilty for even thinking that it needs to be tossed out.  How could I rob my kids of the toys they love?

But, I now see the space it takes up, not only in storage, but also in my head.

It’s more stuff to be maintained, picked up and eventually, stored.

I can either spend my time picking up a whole bunch of old toys that they don’t REALLY play with, or I can spend my time playing with my kids instead.

I’ve saved a rocking horse for my daughter and a bouncing turtle for my son, and that’s it.  All other baby toys have been donated.

Projects either get finished or donated/sold (this includes broken things that need fixin’).

My husband and I are both “project” people.

His projects are much larger than mine (remodeling a truck/boat/fork lift, for instance) but they both take up space, physically and mentally.

Now that we’re on the move again, I made the decision to either finish my projects and fix things that are broken, or get rid of them.  Boy, did that put a little fire under me to get stuff done.

It literally took me 30 minutes to complete two of my projects that had been hanging over my head for 6+ months!

Here’s one of them:

I am a pajama junkie.

I love all things pajamas and I’ll admit that I have an excessive amount of them.

But, when we move into our RV in a couple of short weeks, we won’t have the space for my 20 pairs of pjs.  🙁

We are going to limit our clothing selections to 5-7 in-season selections of clothing.  5 dress shirts, 5 play/work shirts, 5 shorts and 5 pairs of pajamas.

It’s hot where we live, so the need for socks is pretty slim.  We can get away with 5-7 pairs of socks for each of us as well.

After our last move, I swore that we would spend the year in our rental house getting more organized.

When we moved out of our house last year, my husband spent 3 nights in our Airstream trailer, parked in front of our old house, because he would move stuff until the wee hours of the morning, sleep for a couple of hours and then get up early and start again.

We were running out of time before closing on our house, and we had a lot of stuff, most of which was an unorganized mess.

If we had had solid organizational systems in place, our move would have gone a lot more smoothly and we would have had minimal stress.

I really like the clear containers so I can label them from the inside and see what’s in them.

Our seasonal clothes will be in larger containers, as well as the kids’ toy collections.

Seasonal decorations are also stored in these containers so I can easily located them when I need them.

For RV living, we will have socks and undergarments stored in smaller containers for easy closet storage. 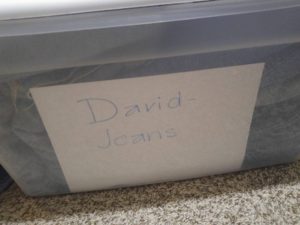 Our kids’ art collections and posters are kept in this organizer.

Reducing the paper mountain around our house has made a HUGE difference in feeling organized.

This box will be easy to move and I won’t find miscellaneous art in every box I unpack.

The Costco and Sam’s members just quit reading this post.  I kid, I kid.

Honestly, I haven’t bought in bulk in a very long time.

But, now I’m seeing that it definitely won’t jive while we are living in an RV.  We just won’t have the space.

Now, I’m not saying that I won’t buy a 24 pack of toilet paper at the grocery store, but I won’t buy things in bulk that won’t be utilized within a month or so.

The less, the merrier.  Isn’t that the saying?

Say “NO” to hand-me-down items.

Unless it is something you can’t live without (which it usually IS NOT), say “NO” to the things people want to hand down to you.

While I am ever so grateful for all of the things I’ve been gifted, new and used, we just don’t have the space for anything else at the moment.

I might miss out on some really cool stuff, but I can’t allow the mountain to grow out of control again.

CDs and books:  a love-hate relationship.  I love to have them and I hate to store them.

While I love to display my books to show how much I’ve read, all they do is collect dust.

I prefer to read books, but it’s so much easier to download a book digitally and NOT have to store it!

Unless it’s a special book, it’s being sold or donated.

And the ones I want to read in the future will be checked out from the public library, or downloaded onto the Kindle.

Onto the subject of CDs.  I recently bought three of these CD cases  (one for the car, one for kids in the house, one for adults in the house).  I threw all of the cases away and it felt GREAT!  So much cleaner and so much LESS CLUTTER!

Get rid of unnecessary furniture.

The amount of furniture that we have accumulated over the years baffles me to think about.

What happened to just the necessities?

We have a couch, a coffee table in front of the couch, and a table behind the couch.

When we moved into our rental house, the only one that fit was the couch.

You wanna know a secret?  Neither of us have missed the other couch tables AT ALL.  They were just extras.  We will probably pull them back out of storage to use when we move into our new house, but they just really aren’t necessary.

We have a lot of kitchen duplicates.

When my husband and I combined households, we combined dishes and all kitchen utensils as well, instead of just buying new, or choosing one.

With our downsizing, has come a lot of purging in the kitchen area.  We have condensed knives, eating utensils and pots/pans.

I’ve gone through all of the kids’ cups and matched them.  Anything that didn’t have a match, was thrown away.

We will pack up 4-6 each of plates and bowls and will bring 5-7 of eating utensils.  We will have the basics like a cutting board, a couple of spatulas and some mixing spoons, but not a bunch of duplicates.  It’s just not necessary.

I find it ironic that while we are in the midst of building our spacious dream home, we are finding that we want and need LESS stuff.

Maybe the tiny house life will grow on us and we won’t want to leave.  😉

Down sized lately?  What tips do you have? 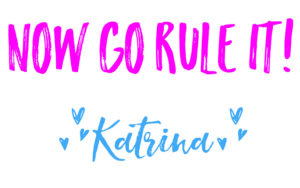